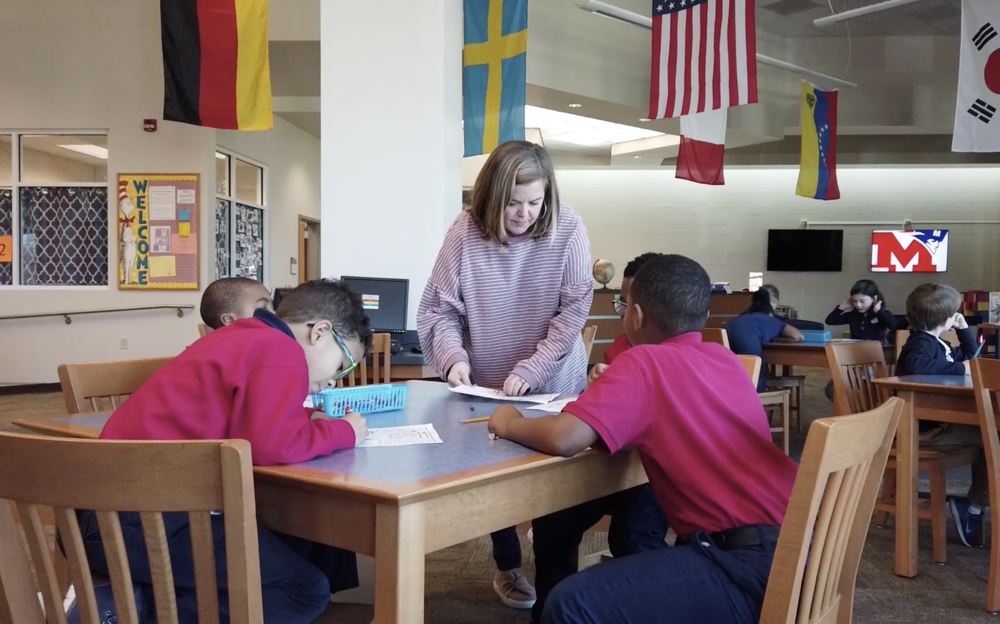 Character Counts: How a focus on character development and healthy habits has improved life in the classroom and community

NOTE: This article was originally published in the March 2021 issue of “Instructional Leader,” a monthly newsletter of the Arkansas Association of Educational Administrators.

Character counts.  It truly matters.  This is one of many lessons I learned from my parents, teachers, coaches, and other adults who influenced my life as a young man.   Doing the right thing and putting others first were the lessons preached to me daily from one person or another.  Any other talent or ability that I would ever have would be moot if I didn't have character.  It is easy to see God’s plan in action decades later, as I serve as the principal of a diverse magnet school whose theme is based on leadership and character development.

Herbert Carter Global Community Magnet is a K-6 magnet school within the Marion School District in Crittenden County, Arkansas.  HCGC was established in 2018 as part of an elementary school reconfiguration which was the brainchild of new superintendent, Dr. Glen Fenter.  After collecting data from community stakeholders, national research, and other successful Arkansas schools, Dr. Fenter designated HCGC’s theme as one to be abstract by design, focusing on global awareness, celebrating cultural differences, and the development of leadership skills.

The school’s namesake, James Herbert Carter, was the superintendent of the Marion School District for over two decades.  Leading the district through integration, substantial growth, and many other challenges, Mr. Carter was able to leave a lasting legacy for students, teachers, parents, and community members who all benefited from his strong sense of character and devotion to education.

Developing character with staff and students

Knowing that character matters is one thing; developing a plan and implementing it is a task all of its own.  HCGC became a Leader in Me school, adopting Stephen Covey’s 7 Habits of Happy Kids as its character education platform.  Staff training is embedded throughout the school year, with concepts addressing leadership,  positive school culture, and academic success.

Leadership strategies and a common language are infused with classroom activities, schoolwide events, and especially the counseling curriculum.  Every lesson, assembly, auxiliary class, and parental involvement event, all incorporate the 7 Habits.  Daily, students are involved in discussions about how to be proactive, setting a goal and how to reach it, the importance of having integrity, and how to work well with others.

Very early on in the magnet reconfiguration process, it was evident that community members wished to have a school where students wore uniforms each day.  Of course, some parents were not in favor of the uniforms. But that is the beauty of magnet schools; parents have choice.  Having uniforms has allowed our students to have immediate buy-in to the high expectations at HCGC.  It is communicated with students on the very first day of school that wearing the uniforms signifies that HCGC students are special.  They are responsible, respectful, and

see the big picture.  Students know that wearing Mr. Herbert Carter’s crest on their shirt makes them stand out and it really gives them a sense of pride.  Students making fun of each others’ clothes has been virtually non-existent since our first day in 2018.  Everybody knows that they are part of the same team.  It brings a tear to my eye to tell it, but a student said it best.  “Nobody knows that I’m poor.  Now they just know I’m smart.”

Growing students whose character is anchored by a belief in the importance of doing the right thing and serving others has, from the beginning, been of the utmost importance to staff and parents.  Acknowledging and celebrating differences is also a key piece in teaching students how to have that type of character. That is why the HCGC House System is central to school culture and character development.

Every student and staff member is placed in one of four “houses” or teams upon their initial arrival to the HCGC campus.  Placement is based on personality traits.  Each house is represented by a different character attribute (compassion, courage, friendship, and integrity).  Each house has its own set of colors, chants, symbols, etc. to build enthusiasm and buy-in.  Students work to earn points for their house each 9 weeks with a large celebration at the end.  Essentially, a school-wide positive behavior tracking system, the house system also serves to highlight the differences between people and celebrate how our school functions better because of these differences.

Student enthusiasm over the house system has trickled into homes and the community.  Parents have reached out wishing to know their house.  A parent event was organized in September 2019 to reveal the parents' new houses.  Set up like a sorority bid-day, we had almost 350 parents in attendance that night and over 200 at the same event the following year.  Parent and student support continues to climb through attendance of special events and the purchasing of house merchandise such as shirts, hats, socks, bracelets, etc.   When you ask a student to tell you about life at HCGC the first two things they will most likely tell you are that they wear uniforms and what their house is.  The house system is truly a big part of the fabric of our school.

Part of being proactive is understanding that the landscape of our community is changing.  The need to know a second language is greater than ever.  That is why Spanish is offered to every student K-6 weekly.  HCGC’s Spanish teacher, Ms. Carolina Sanchez, is a native speaker who actually learned the English language as a student here in Marion.  Having a passion for her native language and the students at HCGC make her the perfect fit.  Ms. Sanchez loves to quote the Chinese proverb saying “To learn a language is to have one more window from which to look at the world."

Exposing our students to a second language has provided our students with so much more than just preparing them for a Spanish language course at the secondary level.  First, HCGC has become a place where students who do not speak English at home can feel not only accepted but celebrated.  Knowing that everyone is learning Spanish, it is considered “cool” to already be fluent.  The majority of ESL students in our district have chosen HCGC as their K-6 home. These students are at ease knowing that there are many other students who look like them, sound like them, and share common background experiences. As Ms. Sanchez says “Being bilingual allows us to not only celebrate our differences, but examine just how similar we all really are.”  Ms. Sanchez serves as a resource for these students, their families, and teachers.  She assists with academic needs obviously, but provides so much more to these families that they are not accustomed to having.  Spanish class has been a huge blessing for many.

A large part of HCGC’s leadership theme is to show students the value of seeing the big picture, knowing that others are impacted by their actions, and that seemingly small gestures can have a huge impact.  One way in which students come to learn this belief is by being involved in community service projects on a consistent basis and in a meaningful way.  Each grade level adopts a community service project to focus on each year.  Projects fit in with the current curriculum and often correspond with the United Nations’ 17 Global Goals for Sustainable Development.  The best results have come from when students can learn about and understand an organization, identify a need, and then develop a plan on their own to address that need and get their classmates involved.  Our students have worked closely with various local and national groups including local nursing homes, Marion Animal Shelter, shelters for the homeless, Thirst Project, CASA, Steudlein Learning Center, Mariposas Collective, and many others.  Developing lasting partnerships with places where the school can serve a need is a great first step in showing our students that they can change the world.

One example of how classroom learning translates to positive change in the real world is shown through the actions of 2018 HCGC 4th-grade students. Learning about recycling through the UN’s Global Goal 12: Responsible Consumption and Production, these students decided they wanted to recycle every plastic bottle served during lunch in the 4th grade each day.  Students then saw a need to recycle for the entire school and were inspired to ask to speak at a Marion City Council meeting in February of 2020.  At the meeting, students spoke to the need for a partnership between the school and the city council and explained the importance of recycling, not only for HCGC but for our community.  Earlier this fall the City of Marion, along with the East Arkansas Planning and Development District, presented HCGC with its very own recycle trailer where every piece of plastic that enters our school can be recycled.  This project is maintained 100% by HCGC 4th-grade students.

Proof is in the Pudding

So how do we know our theme of leadership is working?  What does the data tell us about the impact character education can have on a school?  District initiatives such as improved facilities, the magnet school reconfiguration, a very intentional effort to focus on reading instruction and dyslexia interventions, have all led to a massive swing in regards to the amount of students who have used school choice to enter or exit the district.  From 2015-2018 the district was averaging almost 40 more students who school choices out of the district than those who school-choiced into the district each year.  This school year, however, the district had 54 more students come into the district than leave.  HCGC's image has certainly played a part in this success.  We started with a mere 450 students in our first year, and now our enrollment stands at 650.  HCGC’s Growth of 150 students in just two years is a sure sign that something special is happening.

Character education obviously plays a huge role in student behavior and discipline.  Since 2018 the number of students who received referrals resulting in ISS or OSS has decreased by 75%.  Providing students with the skills necessary to be proactive, think about others, and see the big picture has led to this dramatic decrease.  Another contributing factor is providing teachers with the training needed to address behavior in a positive way, such as the house system, the 7 Habits, better understanding students who live in poverty.

Student enrollment and improvements in behavior are not the only measure of the effectiveness of character education.  HCGC has had several students stand out with various achievements.  Mia Adkins, former HCGC 5th and 6th-grade student, was awarded the National Civil Rights Museum’s Keeper of the Dream Award in 2019 for her work establishing a school-wide service project to raise money for the Thirst Project to build wells for communities without access to clean water.  With Mia’s leadership,  HCGC students raised over $2,000, thus providing multiple international families access to clean water.  Other HCGC students have been awarded grants from the Arkansas Game & Fish Commission, finishing in the top 10 of the Martin Luther King Jr. Commission’s Day of Impact Essay Contest, and have been recognized for various other achievements within the community.

Moving Forward HCGC students and staff were disappointed to not take the ACT Aspire in 2020 due to the COVID-19 pandemic.  All of our goal setting, planning, and hard work was not measured.  We feel like we were going to be successful and show a lot of student growth, but that remains to be seen.  Early interim assessments for this school year are showing that students are making progress and teachers are adamant that they feel students will be successful and show exceptional growth.  As our character grows, so does our faith that the leaders who are at HCGC today will come to do truly exceptional things for the community of Marion and the state of Arkansas in the years to come.